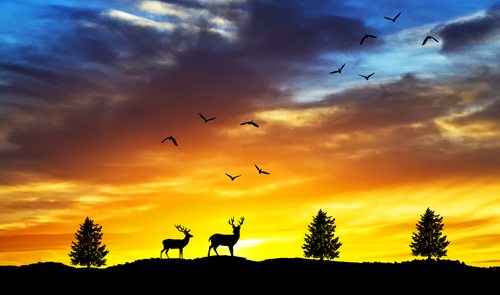 It’s early autumn at the ranch and love is in the air. The deer are in hard rut and the season is a magical time. The sounds of the deer in fall make this an amazing time for deer hunters in North Texas; red deer roar, fallow deer grunt, and sika deer bugle. Experience the hunt during this special time and you’ll remember it for a lifetime!

Hunting during rutting season requires a change in tactics. The deer’s behavior changes and your hunting behavior will need to adjust to be successful. The different phases of the rut will require that hunters make different shifts – let’s take a look at the various periods of rut season and what you can expect.

Look for environmental evidence of rut transition. Tree bark will show signs of scraping as deer use the roughness to remove velvet from their antlers. You’ll see hollows in the ground where the bucks have urinated and rolled around in the resulting mud. The deer stay mostly to wooded areas and are less likely to be found in the open.

Mature males will begin seeking out does to get an idea of their location once they are in estrus. Young males will become active earlier and may begin to get impatient for the does to become receptive. Deer will be seen out during the day more often. Your chances of success during the hunt will be improved if you stay near signs of rutting.

Get your game face on hunters, because this is where the magic happens. Every eligible bachelor in the woods will be searching for his lady. Bucks will lower their guards so they can locate their mates. Here is where your bags of tricks will do the most good. Using doe-in-heat calls will attract males looking for a mate. Buck-grunt calls also work to draw in males who want to chase out the competition from their territory. Scents can also work to attract active males, but pay attention to where you plant the scent relative to where you’re setting yourself. You want the deer to smell the hormones, not the humans.

Decoys can also be effective at attracting a male. As a buck approaches a doe, if she’s receptive to his advances she’ll stay still. A decoy looks very much like an interested lady and will draw in your prize.

The tending phase is where most of the physical mating occurs and can be a more difficult time to hunt successfully for obvious reasons. Pairs settle in to bedding areas under thick cover. Finding bedding locations will be your best tactic to catching a deer who happens to slip up and break cover during this time.

Deer become more cautious after breeding and settle in to their winter behavior. Does become much more difficult to find and males mostly only come out of their thick cover to feed. Stick to bedding and feeding areas for the best chances of locating deer after mating.